Share
As of November 13 (Tuesday), the Yomiuri TV 55th Anniversary Character Illustration Contest is open for submissions.
To commemorate the 55th year since Yomiuri TV’s first broadcast, Mr. Masafumi Nishida, creator of the animé "TIGER & BUNNY" and the live-action version of "Youkai Ningen Bem (-HUMANOID MONSTER BEM-)", is looking for a character design for a shoe named "Kukku".

The grand prize winner will receive 550,000 yen and their design will be made into a character who will be loved by many generations to come, with plans to be featured in picture books, anime, and products in celebration of Yomiuri TV’s 55th anniversary.

We look forward to your participation. 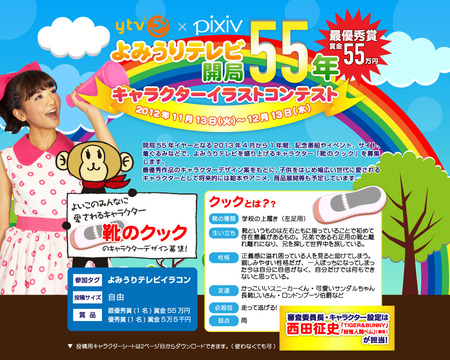 【Participation Method】
We are looking for a character design for Kukku
Use your imagination--come up with anything you like!
You can download a template from the second page of the Contest Outline. Use of the template is not required.

You must tag your entry with the following: よみうりテレビイラコン
※Please read the Terms and Conditions for details.

【Profile of Kukku】
Type of shoes: indoor school slippers (for the left foot)
Personal history: The things known as “shoes” are something whose meaningful existence is derived from being paired together as left and right.
Having been separated from his brother the right shoe, Kukku goes on a journey and searches the world for his older brother.
Personality: Overflowing with a sense of justice, he ends up saving troubled people whenever he sees them. Though he has an approachable nature, he has lost confidence in himself from being alone for so long and thinks that he can do nothing on his own.
Friends: Cool Sneaker-kun, cute Sandal-chan, old man Boots (Chouka), Count (Hakushaku) London Boots, etc.
Special move: Run away, run away!
Weakness: Rain

【Prizes】
■Grand Prize (1 winner)
・¥550,000 prize money
・Use of the grand prize winner’s design for Kukku.
Starting with Yomiuri Television’s 55th anniversary in April 2013, it is planned to promote the accepted character for one year through e.g. a commemoration program and event, an official site and other venues, a Flash anime, a real-life character costume/mask, and so on.