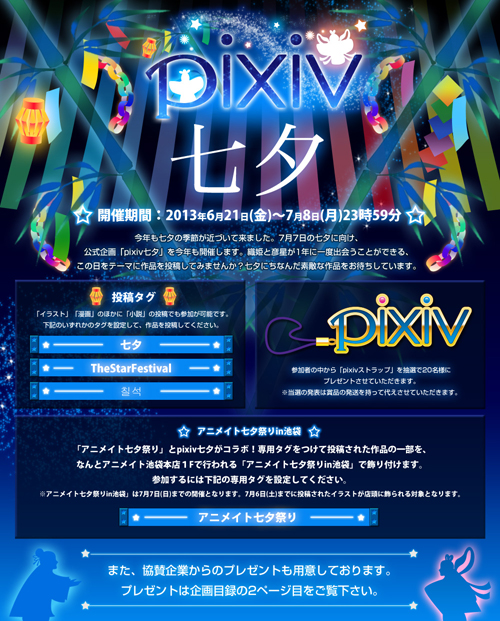 It’s that time of the year again for Tanabata! Tanabata, meaning “evening of the seventh,” is a Japanese star festival originating from a Chinese festival called Qixi. While the Chinese one follows the lunar calendar, modern Japan follows the western calendar, so Tanabata is usually celebrated on July 7th even though in some areas of Japan, it will be celebrated on August 13th, which is the 7th day of the 7th month of the lunar calendar this year.

Tanabata celebrates the meeting of Orihime and Hikoboshi (represented by the stars Vega and Altair) who were deities that were separated by the Milky Way. They are only allowed to meet each other once a year on the seventh day of the seventh month. Present-day Japan celebrates this festival by writing wishes, poetry, and more on tanzaku, which are small pieces of paper. People hang them on bamboo and sometimes decorate them.

pixiv celebrates this year’s Star Festival by offering a contest! To help Orihime and Hikoboshi meet each other this year, we’re looking for illustrations that will celebrate Tanabata.

Animate Special: This year, Animate in Ikebukuro will be displaying illustrations from this contest on their shop walls! For those who’d like their chance to have their illustrations hanging in Animate Ikebukuro, please attach the “アニメイト七夕祭り” tag to your illustration.

【How to Enter】
(1) Using the theme of Tanabata, please draw an illustration, comic, or write a short story. Things related to Tanabata include tanzaku, starry night skies, and wishes.

(2) Upload your creation to pixiv and attach one of these contest tags:
Contest Tags: 七夕 / TheStarFestival / 칠석

(3) If you’d like to participate in the Animate Ikebukuro Star Festival portion, please also attach this contest tag to your submission:
Contest Tag: アニメイト七夕祭り

【Prizes】
You can win some of these prizes below if you are selected as a winner! The winners will be chosen by a lottery or raffle.

・Set of 3 books above will be awarded to 3 winners. 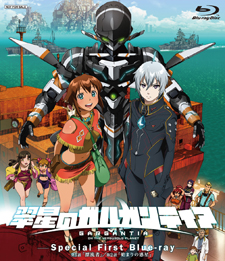 The Blu-ray will be signed by the voice actors of Ledo and Amy and will be awarded to one winner.

・A pixiv logo strap will be awarded to 20 winners.


We’re looking forward to all your creative Tanabata entries!