Co-request together with others! pixiv's new Requests feature was released! 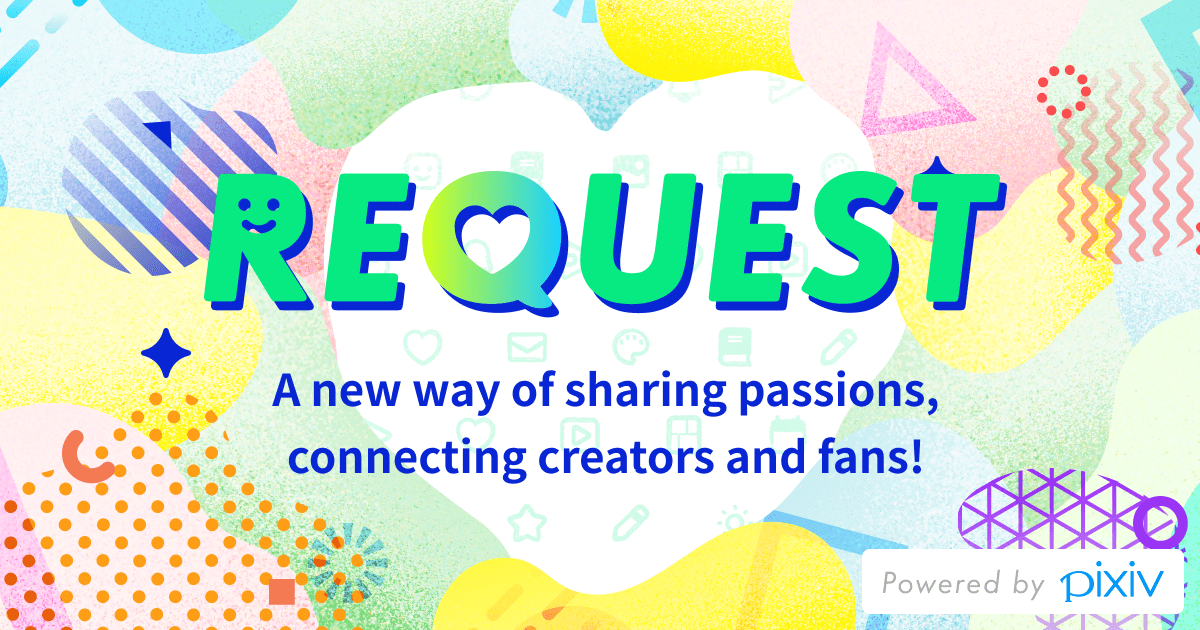 The new Requests feature was released on September 30th (Wed), 2020, on the mobile version and desktop version of pixiv, enabling creators to receive requests from their fans in return for a fee.

To celebrate the release of the new feature, starting from release day you will be able to take advantage of the "Start co-requesting works now!" event and join in on requests sent to six popular creators by pixiv's official profile. Moreover, we are discounting the commission on requests from 10% to 3.99% and returning a part of the commission to the creator as part of our "Thank-you campaign! 3.99% commission promotion".


About the Requests feature and co-requesting a work with others 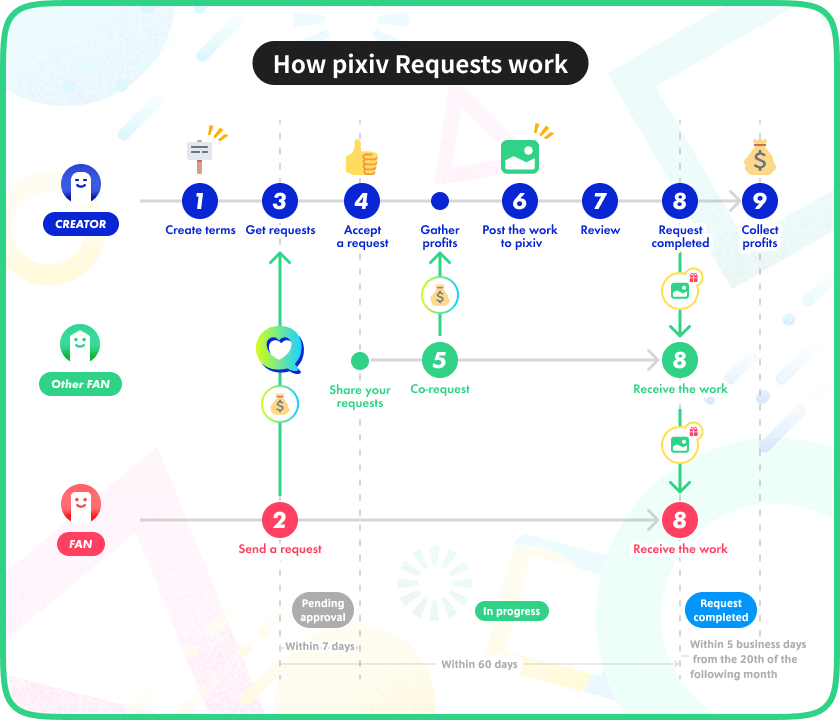 By turning on the Requests feature, creators will be able to solicit creative requests from their fans on pixiv in return for a fee. Creators can set a "target price" for their requests in advance. Fans can request work they would like to see come to life by the hands of creators who have activated the Requests feature.
Creators can choose the requests they would like to take on among all the requests received and start working on them. Requests are then completed by posting the finished work on the creator's profile page or by posting them as URL-restricted works that can only be accessed from those who sent the request.
Requests that are taken on via the Requests feature can be fully completed on pixiv. Creators solicit paid requests, choose which requests they would like to take on, and publish their work to be delivered to their fans, all of which happens on pixiv. The Requests feature is compatible with all four types of works that can be posted on pixiv: illustrations, manga, novels, and Ugoira. 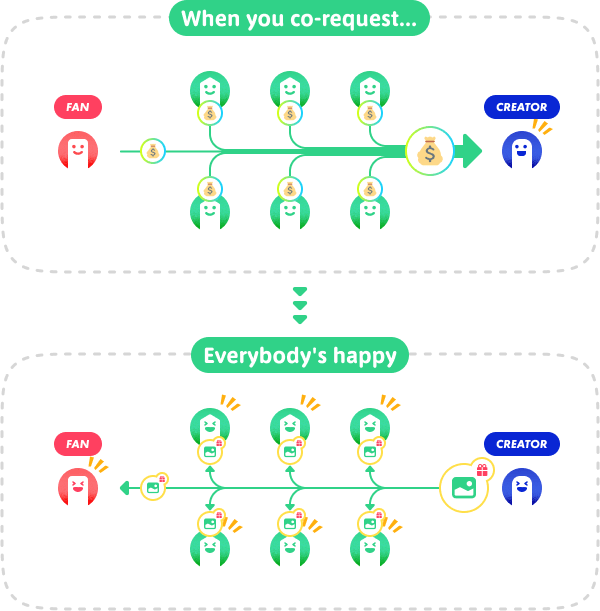 What's unique about this feature is the possibility to "co-request" a work, a way for fans to enjoy requests together. By offering the same amount of money as the original request, fans can join in on requests they like and co-request them. This way, once the request is completed, they will also be able to receive gift files from the creator.
After completing a request, creators receive all the money coming from the request itself and co-requests (excluding the service usage fees).
Thanks to the Co-request feature, not only can creators gather more support and sympathy for their own creations from their fans, but those who find it difficult to think of requests can have an easier time participating!

pixiv's new Requests feature was developed with the intention of providing a place where creators and fans' passions can connect and everyone can enjoy creative activities. 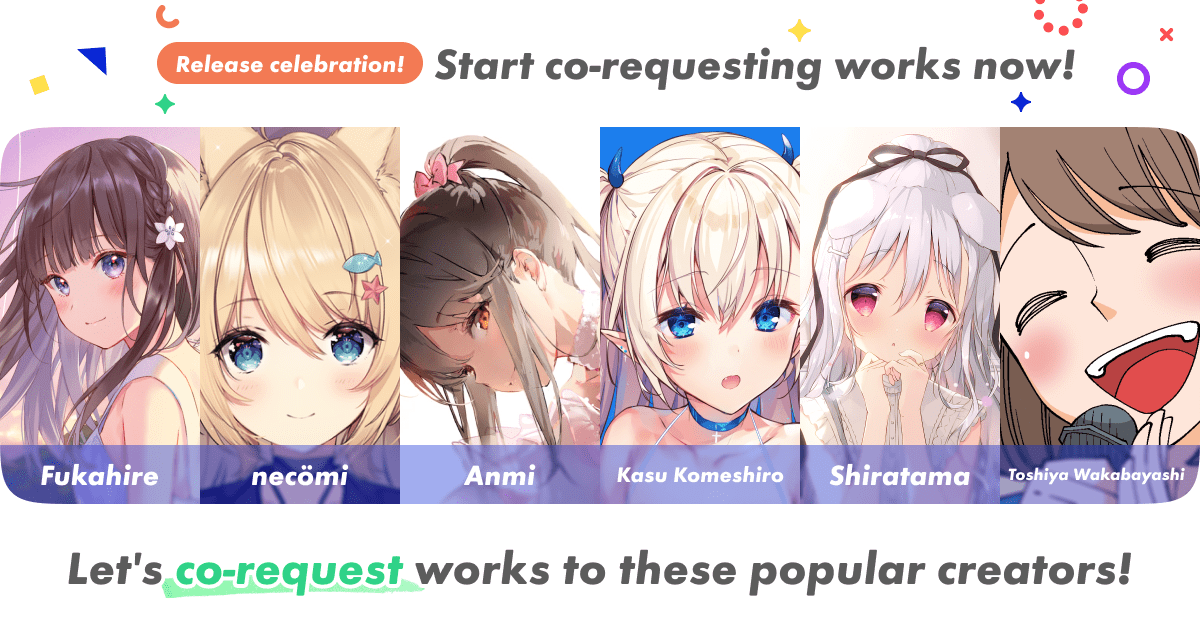 To celebrate the release of the new feature, starting from September 30th (Wed), join the "Start co-requesting works now!" event and try co-requesting the requests sent to six popular creators by pixiv's official profile. The artists participating in this project are Anmi, Shiratama, necömi, Fukahire, Toshiya Wakabayashi, and Kasu Komeshiro. Co-request an illustration of "Kanban-musume Inuchan in fall" to Shiratama, or any other request you like. You'll have a taste of pixiv's Requests feature and will be able to enjoy illustrations and manga from your favorite creators that you can only see right here!

Period: From September 30th (Wed) on.
* The co-request period varies according to the creator.
How to participate: please visit the "Requests feature" website.

To thank you for always using our service and to encourage more users to try out pixiv Requests, from September 30th (Wed) to December 31st (Thu), 2020, we are discounting the commission on requests from 10% to 3.99% and returning a part of the commission to the creator.

Our mission is "to build an exciting space for you to enjoy creative activities", and we support people's creative activities around the world. pixiv's new Requests feature was developed with the intention of providing a place where communication between creators and fans can create opportunities for creators. We plan to collaborate with other services in the future in order to allow even more users to enjoy pixiv.

pixiv is continuously developing new services and features to support the passions of creators and their fans.